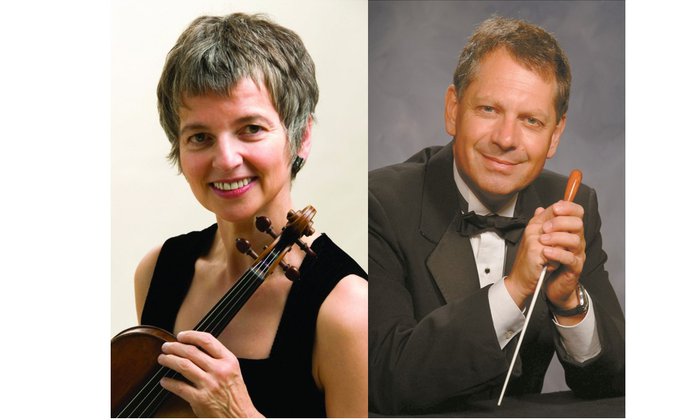 As first violinist of the Lark Quartet from 1988 to 1996, Eva Gruesser performed on many occasions at many of the world’s most distinguished concert halls including New York’s Lincoln Center and Weill Hall, the Kennedy Center and Corcoran Gallery in Washington, DC, London’s Wigmore Hall, and the Théâtre des Champs-Elysées in Paris. With the Lark Quartet she won the Naumburg Chamber Music Award in 1991, and the Gold Medal at the Shostakovich International String Quartet Competition in St. Petersburg in 1991. Following the Shostakovich Competition, the Lark Quartet was invited by Gidon Kremer to play at the Lockenhaus Festival in Austria. With the quartet Ms. Gruesser also performed at the Sviatoslav Richter Festival at the Pushkin Museum in Moscow, at the Schleswig-Holstein Festival in Germany, and the San Miguel de Allende Festival in Mexico. She has performed as guest concertmaster with the Sydney Symphony Orchestra, Opera Australia Orchestra, and the Brooklyn Philharmonic Orchestra, and was a member of the Da Capo Chamber Players from 1997 until 2001. As a committed exponent of contemporary music, Ms. Gruesser collaborated on commissions with composers Aaron Jay Kernis, Libby Larson, Penka Kouneva, and Jon Deak. She performed with Lukas Foss at Weill Hall in his “Three American Pieces” for violin and piano, and recorded Martin Bresnick’s "Bird as Prophet" for violin and piano, and Trio for violin, clarinet, and piano.

Eva Gruesser has been a regular guest at summer chamber music festivals including the Klangfrühling Schlaining, the Moab Music Festival in Utah, the Kowmung Music Festival in Australia, and Monadnock Music in New Hampshire. She has recorded with Decca/Argo, Arabesque and New World Records. Gruesser can be heard in a recent recording of the Bach Double Concerto where she was co-soloist with distinguished violinist Elmar Oliviera and the Arco Ensemble. She played in the Israel Philharmonic Orchestra for two years, performed as soloist with the BBC Scottish Orchestra, and was a founding member of the Ensemble Modern in Germany. Ms. Gruesser studied violin with Wolfgang Marschner in Germany, Ilona Feher in Israel, Ramy Shevelov, Simon Goldberg, and Zinaida Gilels and graduated summa cum laude from the Freiburg Hochschule für Musik. Eva Gruesser is also a graduate of the Hannover Hochschule für Musik and the Juilliard School.

Conductor and violinist Rohan Smith is also Music Director of the Midcoast Symphony Orchestra.  Please see his bio via this link.

It was a pleasure to watch the humor and imagination of the conductor, and also to see so many children in the packed house to enjoy the music.