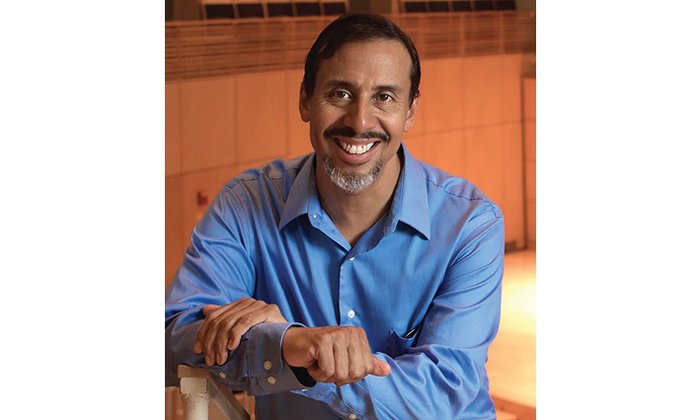 George Lopez, pianist, has been featured across the globe as recitalist, soloist with orchestra, and collaborator. He received critical acclaim for his interpretation of Bach’s Goldberg Variations at the Concertgebouw in Amsterdam and performed the complete Beethoven Piano Concertos in two concert seasons. He was invited by The International Holland Music Sessions on a world tour where he performed in Paris, London, Cologne, New York’s Weill Recital Hall at Carnegie Hall, and Los Angeles where he was hailed by the Los Angeles Times for his “. . . musical perspective, continuity, and kaleidoscopic colors.”

He performed Gershwin’s Rhapsody in Blue to a capacity crowd with the New Hampshire Music Festival Orchestra and has performed recitals in Switzerland and Italy. He premiered a piano concerto written for him by Romeo Melloni, which he recorded with the Czech Philharmonic Chamber Orchestra, with Maestro Paul Polivnick.

His chamber music collaborations include the Emerson String Quartet, the Rainier Quartet, the Ying Quartet, the Incanto Ensemble, and the Aurea Ensemble, along with members of some of the top orchestras in the country. He performed with cellist Emmanuel Feldman in Boston’s Jordan Hall in a world premiere of Jan Swafford’s In Time of War for cello and piano.

Mr. Lopez is an advocate for music education and a popular lecturer on the arts in New England, has had active studios throughout New England at premiere schools, and has given lectures for the European Piano Teachers Association in Amsterdam.

Now he is the Beckwith Artist in Residence at Bowdoin College. He has also taken up the baton as conductor of the Bowdoin College Symphony Orchestra, an all-student ensemble, which performs full symphonic programs each semester. His "Music in the Museum" series at Bowdoin has consistently sold out to audiences who enjoy his creative and engaging lecture recitals on the relationship of music to art and ideas.