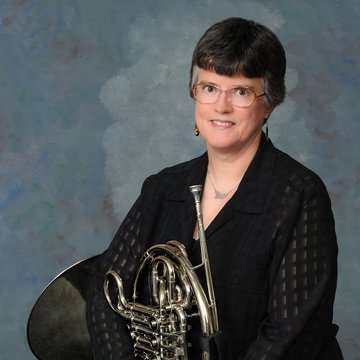 I joined MSO after the first concert of the 2011-2012 season, when a position opened in the horn section. I'd been going to MSO concerts for years and wishing I could play with the group, so I was thrilled to have the opportunity to join. The music is wonderful and the people are even better! Playing with such a talented section has pushed me to improve.

I was lucky enough to attend a public school where I could play in the orchestra and several chamber groups, in addition to band. During high school I played with the Suffolk Symphony Orchestra (Long Island, NY). I studied for a couple of years at Crane School of Music. During that time I also was a counselor at a music camp and played in the pit orchestra for a touring Russian ballet company. Eventually I decided that music wasn't the right career for me and headed off into computing. Music in the evening was how I cleared the day's stresses from my head, until I retired.

When I came back to playing in 1987, at first I only played at home with my pianist husband. I joined the University of Maine Farmington orchestra and band in about 2000. As I started feeling more confident I branched out, including a brass quintet, various community bands, a jazz horn workshop, and a group that visited various nursing homes playing by ear whatever the residents requested. After we moved to the mid-coast area in 2010, I joined the Bowdoin Concert Band and MSO. I still play chamber music for fun whenever I can find others with the time and inclination.

My taste definitely runs to more contemporary music, as long as it is tonal. In my duets with my husband, we play a lot of jazz-inflected music, often by composers younger than we are. When it comes to MSO programs, the composers I enjoyed most were Shostakovich, Stravinsky, Debussy, Prokofiev, and Bartok.

It was a pleasure to watch the humor and imagination of the conductor, and also to see so many children in the packed house to enjoy the music.